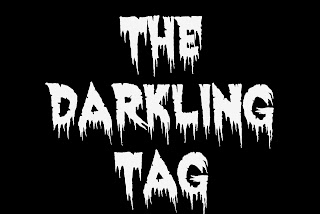 I was tagged by the awesome Meagan Kyla at Coffin Kitsch for the Darkling Tag.  Thank you, Batty McGothson! LOL  I, in turn, tag 3 of the 4 people who actually follow me since Meagan already tagged one of them.  Bane at Goth It Yourself, Laura at Roses and Vellum, and Goth Gardener.  I would have tagged Syl at There's Bats in My Coffee, too. :)

What is your favourite candle scent? Anything apple-scented but not apple-cinnamon.

Do you have a favourite book? "Pillars of the Earth" by Ken Follett

Are you a tea or coffee person? Neither.  I don't even like the smell of coffee and I have yet to find a tea that I like.  Now, good ol' Southern sweet tea?  That's another thing entirely that I only enjoy every once in a great while. :)

What is your favourite perfume/cologne? Either "Funeral Parlor" by Vampfangs which is a musky combination of candles and flowers or "Purr" by Katy Perry which is sweet and flowery (I know, I know... but I like it!)  I do realize that these scents are not alike! LOL

Do you have a celebrity crush? I will always have a crush on Annie Lennox (Eurythmics) but my current crush is Gustaf Skarsgård as Floki in Vikings.

If you could change your name to a stereotypical 90s/2000s gothy name, what would it be?  (*giggle*)  Moonface Ravensblood :D

What are your top three tips for surviving hot weather while black clad?  Light fabric, UV-blocking parasol, and a fan

What song always makes you happy (doesn't have to be a goth band?)   Love by Matt White - it's so cheesily happy :)

Are you active in the arts (eg. Play an instrument, paint, write, etc)?  Yes!  I sew, draw, paint and just generally craft.

What is your number one non-gothy hobby?  Food.  I subscribe to a number of food magazines, read a bunch of food blogs, love cooking shows, collect cookbooks, etc.

If you could be a supernatural creature, what would it be and why? I think I would be a muse so I could help people create.

What horror monster-based super power would you have?  Mess with people in their dreams >:)

Do you feel confident or comfortable interacting with other Goths or gothy people (online or irl)? Why or why not?  Goth or not Goth, if a person engages with me first, I am fine.  I just have a hard time approaching others and starting a game of small talk.  I was a lurker online for a long time before I got the confidence to comment on other people's blogs and now I wonder what I was so scared of. :)

Is there something you wish there was more of in your subculture? Like many others have answered, more acceptance and less elitism.  I've only fairly recently decided to use "Goth" as a way to describe myself but have been lurking the blogs and forums for a while.  There seem to be quite a few who believe their way is the "one true way" and everyone else is a poser.  I have also been a part of the Pagan and BDSM communities and they were just as full of the One True Pathers.  It seems to be common in most alternative scenes which is a little sad.  But the thing I like about the Goth blogs that I follow closely is that they don't buy into that philosophy

Care to share an embarrassing story related to your "darkliness"?  This isn't embarassing but I thought it was kind of funny. :)  There was a contractor from another conuntry that used to work on my floor that I would often run into in the rest room.  At first, she wouldn't make eye contact with me but over time we did the small talk dance.  Finally, one day, she asked me "Why are you so sad?"  I wasn't feeling sad... at all.  In fact, happy is my normal state of being.  I asked her what she meant and she said, "You wear so much black and bones.  Doesn't that mean you are sad?"  I happily explained to her that I just preferred black clothing and the bones helped remind me that life is too short to be sad.

Oh, this is kind of embarrassing.  I saw the movie "Fargo" when it was in theaters (I'm old LOL) and laughed hard for a good 2 minutes over the wood chipper scene before I realized no one else was laughing and people had shifted away from me.  :)

How are you at DIY? Pretty darn good if I have the right tools.  Not like Bane, though.  She is my DIY idol!

Confessional (aka True or False):

I ALWAYS remember to wash off my makeup at night.  False.  Unless I get super made up, most of my make up has been rubbed off my the end of the day.

I sleep with plushies.  False.  Rustle and Sidia would get jealous.  It's already hard enough keeping Sidia from turning Rustle into a minion and taking over the world.

I wear non-black pyjamas most nights.  False.  I don't really wear pajamas and most of mt at-home-lounge clothes are black but there is some grey, red and pink thrown in there.

I think Andrew Eldrich is overrated. I'm really not sure on this one.  People seem to like joking about him.

I don't like vampires.  False.  As long as they don't sparkle.

I don't like clubs. True and false.  I want to like clubs but I get overwhelmed with sensory overload.  So if I do go to a club, I get there earlier and find a nice spot with a wall behind me where I can people watch.  I am also the dork with ear plugs because my hearing is bad enough on its own. :P

I don't enjoy graveyards. False.  If they weren't outside, though, I would enjoy them a lot more. :)

Blood makes me queasy.  False.  I've never had an issue with blood, mine or others.

I'd sooner faint than pet a spider.  True and false.  If someone introduces me to their spider and it seems friendly, I'm more than happy to pet it and play with it.  If it's some random spider on the street or leashed up in someone's yard, though, I'll keep my distance.

I don't like haunted houses. False.  The tourist trap ones are fun but they are not scary.  I can't suspend disbelief enough to actually get scared.  Real ones, however, are fascinating.  I'm a skeptical believer, though.  I believe in ghosts, spirits, hauntings, etc. but I also know/think a lot of phenomenon can be explained by the physical realm.

I've never read Dracula. False.  It's been quite a while, though.

I think "Bela Lugosi's Dead" is a long and boring song.  True.  Not my thing but I can see why other's like it.

Sashi
Hi! I'm Sashi! MN born and raised but now in Atlanta, GA. I'm a corporate employee by day and, by night, an artist, a crafter, a cook, a dreamer, a DM, a kitty mama, and a wife. Well, I'm those things during the day, too, but I have to at least to pretend to be grown up M-F 7am-4pm.